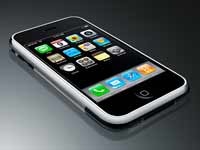 The iPod Touch can now store more music and video files. Its capacity reaches 32 GB for the price of $499. The new enhanced models have been left unchanged from their previous models. However, they come complete with new software. It gives customers an opportunity to edit home screen and use Google Maps.

The new move taken by Apple is expected to boost sales of the devices.

The iPhone is a multimedia, Internet-enabled mobile phone designed and marketed by Apple Inc. It has a multi-touch screen with virtual keyboard and buttons. The iPhone's functions include those of a camera phone and a portable media player ("iPod"), in addition to text messaging and visual voicemail. It also offers Internet services including e-mail, web browsing, and local Wi-Fi connectivity. It is a quad-band mobile phone that uses the GSM standard, and hence has international capability. It supports the Enhanced Data Rates for GSM Evolution (EDGE) data technology.

Following the success of iPod, Apple announced the iPhone in January 2007. The announcement was preceded by rumors and speculations that circulated for several months. The iPhone was introduced, first in the United States on June 29, 2007 with much media frenzy and then in the United Kingdom, Germany and France in November 2007. It was named Time magazine's Invention of the Year in 2007.

The genesis of the iPhone began with Apple CEO Steve Jobs' direction that Apple engineers investigate touch-screens. At the time he had been considering having Apple work on tablet PCs. Apple created the device during a secretive and unprecedented collaboration with AT&T - Cingular wireless at the time of the phone's inception - at a development cost of USD$150 million by one estimate. They rejected an early "design by committee" built with Motorola in favor of engineering a custom operating system and interface and building custom hardware.

Comments made by Jobs in April 2003 at the "D: All Things Digital" executive conference expressed his belief that tablet PCs and traditional PDAs were not good choices as high-demand markets for Apple to enter, despite many requests made to him that Apple create another PDA. He did believe that cell phones were going to become important devices for portable information access.

On January 9, 2007, Jobs announced the iPhone at the Macworld convention, receiving substantial media attention, and on June 11, 2007 announced at the Apple's Worldwide Developer's Conference that the iPhone would support web applications using the Safari engine on the device. Third-parties would create the web applications and users would access them via the Internet. On October 17, 2007 Apple announced that an iPhone software development kit would be made available in February 2008, allowing developers to create native applications that take full advantage of the iPhone's application programming interface.