By Margarita Snegireva. An experiment to see if treating genital herpes with a common drug could dramatically reduce susceptibility to HIV infection failed - a shocking setback for researchers hoping to find a pill that would slow the spread of the AIDS epidemic. 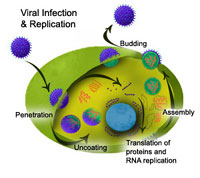 Results of the long-awaited study, which included gay men in San Francisco , Seattle , New York and Peru , as well as women in Africa , were released here Monday at the 15th annual Retrovirus conference, the premiere annual scientific meeting of AIDS researchers.

Nearly 20 years of various studies on herpes had shown that herpes infection nearly tripled the risk of contracting HIV. The assumption was simple - use acyclovir, a proven anti-herpes drug, to knock down that infection, and the odds of avoiding HIV would dramatically improve - by at least 50 percent, on par with the prevention benefit now attributed to male circumcision.

A significant number of medical institutions place the incidence of oral herpes (HSV-1), commonly called cold sores, between 50 and 80 percent among the American population in the fifth decade of life. The overall HSV-1 seroprevalence is dropping a few points per decade in the US, as in all industrialized countries. African-Americans and immigrants from undeveloped countries typically have HSV-1 rates in adolescence that are two or three times higher than that of whites. As a result of lower HSV-1 seroprevalence, more Americans are entering marriage/sexual activity/child bearing years seronegative for HSV-1. The absence of antibodies to HSV-1 from a prior oral HSV-1 infection leaves them susceptible to primary HSV-1 genital infections. This brings with it a risk of vertical transmission to the neonate if the mother contracts in the third trimester, due to lack of time for full seroconversion before childbirth. The seronegative mother (who lacks antibodies) has up to a 57% chance of conveying the infection to her baby while it is being born which can be serious; whereas a recurrent infection in a woman seropositive for both HSV-1 and HSV-2 is thought to be around 1-3%.

The incidence of genital herpes (HSV-2) in the US is estimated to be between 25 and 30 percent or about one in four adults. "Although African Americans are more likely to test positively for HSV-2, Caucasians have a higher risk for active genital symptoms, and over the past few years the greatest increase in HSV-2 has been observed in white adolescents." People with multiple sexual partners and those who become sexually active at a young age are also higher-risk populations for the transmission of HSV-2. According to the American Social Health Association (ASHA), most infected people (up to 90%) don’t know they are infected because their symptoms are too mild to notice or are mistaken for another condition. Several estimates suggest that by 2025 up to 40% of all men and half of all women could be infected with genital herpes.

Herpes simplex 1 and 2 viruses aresimilar in that they are both transmitted by direct contact and can sometimes cause intensely painful fluid-filled blisters, containing millions of infectious virus particles. The primary difference between the two infections is the principal site of infection—mucous membranes of the lips and nearby oro-facial skin for HSV-1, and the genital skin for HSV-2. After initial infection, these viruses both travel to sensory nerves, where they reside as life-long, latent viruses. HSV-1 often lies dormant in the trigeminal ganglia that provides sensation to the lips, lower mouth and neck; while HSV-2 often resides in the sacral ganglia supplying sensation to the pelvic area including the genitals, perineum and upper legs. When the viruses reactivate to cause symptomatic disease, they travel back to the respective skin areas served by these nerves, leading to the different (oral vs. genital) distributions of cold sores.

While both oral and genital herpes are characteristically "nuisance infections" that are not life-threatening, cold sores (on the face) can cause rare severe or fatal disease if they travel to the eyes or brain. This is of particular concern in the case of newborns infected by genital herpes during passage through the birth canal (the risk of this occurring is by far higher when the mother has a primary infection just prior to birth and lacks protective antibodies that would otherwise reduce viable virus shedding). HSV-1 genital herpes has been shown to be more infectious in primary episodes than HSV-2. Both oral and genital herpes infections have periods of active cold sore disease lasting 2-10 days and then remission when the cold sores disappear. The majority of cases however are asymptomatic, but asymptomatic shedding has been shown to occur. Over time, periods of remission generally increase in length, and the duration of cold sores decrease, until the person rarely has active disease. At the same time, virual shedding also decreases. The frequence of recurrences is regulated by specific immunity developed by the patient against the virus. A previous HSV-1 infection tends to ameliorate the symptoms of a subsequent HSV-2 infection. All the viruses in the 'herpes family' are life-long. Recurrences can be triggered in some individuals by specific events, such as sunburn, ultraviolet light, wind, trauma, surgery, stress or other infections. Being that the virus is present but held in check by antibodies in an immunocompetent person, the weakening of the immune system in HIV or transplant patients can trigger serious HSV infections such as keratitis in people with facial infection.

The ways in which herpes simplex infections manifest themselves vary tremendously among individuals. The following are general descriptions of the courses outbreaks may take in the oral and genital regions.