Microsoft Corporation, an American multinational computer technology corporation, added another research lab in the list of already existed. The research lab in Cambridge, Mass will be open in July and will mark a new step in theoretical research – interdisciplinary one – including computers and social science. 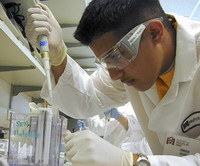 The managing director of the new lab will be Jennifer Tour Chayes, the first woman selected to lead one of Microsoft's international research labs.