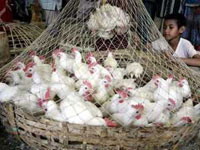 The number of bird flu victims in Indonesia gains 103 people. An Indonesian woman crowned the death toll from the disease over the weekend.

The 29-year-old woman from Jakarta was hospitalized on Jan. 28, six days after she developed the symptoms. On Jan. 29 she was transferred to Persahabatan Hospital in eastern Jakarta. She died on Saturday Feb. 2.

Another woman from Kali Deres, the Jakarta neighborhood closest to Tangerang, also showed symptoms of bird flu and was being treated at Persahabatan Hospital.

Indonesia with its poor medicine and rich population of poultry is considered to be a potential place for a global bird flu pandemic.