By Anastasia Tomazhenkova: Intel Corporation announced at a technical conference this week that it has built a new computer chip with a record 2 billion transistors. Intel code-named it Silverthorne, the chip draws about a tenth of the power used by the company's chips for laptop computers. 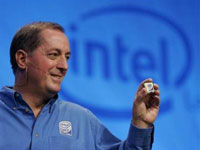 The Santa Clara-based company plans to present more information on its latest Itanium processor and a string of other technological achievements this week at the International Solid State Circuits Conference in San Francisco.

The new microchip will more than double the processing power for a line of chips used in supercomputers.

The chip is expected to be available in the second quarter, and is aimed at mobile Internet devices between the size of a cellphone and a laptop computer.

The company will use an approach called "in-order" execution with Silverthorne, in which computing instructions will be carried out one at a time, thus reducing power consumption.

Intel disclosed details about Silverthorne for the International Solid State Circuits Conference, which continues through Thursday in San Francisco.

Intel claims the former record for transistors on a microprocessor was 1.7 billion, a record held by another Itanium chip.