Circumcising men reduces the chance they and their wives will catch genital infections that may spur HIV's spread, researchers said today at a meeting in Boston. 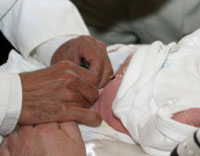 Circumcised men reduced their chances of catching genital herpes by about 25 percent, compared with uncircumcised men. Other vaginal infections that can help spread HIV dropped by as much as 50 percent in wives of circumcised men, research showed. A separate study found that men with HIV who have sex too soon after circumcision may raise the risk of spreading the AIDS virus, Bloomberg reports.

Circumcision is the removal of some or all of the foreskin (prepuce) from the penis. The word "circumcision" comes from Latin circum (meaning "around") and cædere (meaning "to cut").

The earliest pictures are from cave drawings of Ancient Egyptian tombs, though some pictures may be open to interpretation. Male circumcision is a religious commandment in Judaism as well as in Islam, and customary in some Oriental Orthodox and other Christian churches in Africa.

Circumcision is most common in the Middle East, the USA and parts of Africa and Asia. According to WHO 30% of men worldwide have had the procedure, mostly in developing countries where it is common for religious or cultural reasons. Opponents of circumcision condemn infant circumcision as being medically unjustified and an infringement upon individual bodily rights, while advocates of circumcision regard it as a worthwhile public health measure,particularly in the control of HIV in Sub-Saharan Africa.

Circumcision may also be used to treat inflammation of the glans.

The British Medical Association, states “there is significant disagreement about whether circumcision is overall a beneficial, neutral or harmful procedure. At present, the medical literature on the health, including sexual health, implications of circumcision is contradictory, and often subject to claims of bias in research.” Cost-benefit analyses have varied. Some found a small net benefit of circumcision, some found a small net decrement, and one found that the benefits and risks balanced each other out and suggested that the decision could "most reasonably be made on nonmedical factors."