Scientists: sex hormones has no association with prostate cancer

By Margarita Snegireva. Researchers found out that the level of sex hormones in the blood has no connection with the risk of prostate cancer. 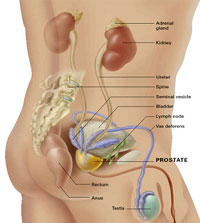 Scientists: sex hormones has no association with prostate cancer

A collaborative analysis of 18 prospective studies deflated the hypothesis that prostate cancer is driven by endogenous sex hormones, according to Andrew Roddam, D.Phil., of the University of Oxford , and colleagues.

"Circulating concentrations of androgens or estradiol do not appear to be associated with the risk of prostate cancer," Dr. Roddam and colleagues concluded online in the Journal of the National Cancer Institute .