A new study showed the direct connection of water temperature in hurricane breeding grounds of the Atlantic with the hurricane activity. 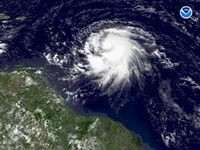 It was not a secret that hurricanes get energy from warm waters - the warmer the water, the higher chance of storm-breaking or storm-strengthening. The study disclosed that if water warms one degree, overall hurricane activity jumps by half.

The journal Nature, where the study was published, described two factors that can influence hurricane activity – wind and temperature - but changes in wind patterns caused less concern than fluctuations of temperature.

The study was focused on the water temperature in a band of tropical sea from Puerto Rico and the northern coast of South America to the coast of Africa since 1950.

In an article in Nature, Kerry Emanuel stated that potential hurricane destructiveness, a measure combining hurricane strength, duration, and frequency, "is highly correlated with tropical sea surface temperature, reflecting well-documented climate signals, including multidecadal oscillations in the North Atlantic and North Pacific, and global warming." Emanuel predicted "a substantial increase in hurricane-related losses in the twenty-first century. Similarly, P.J. Webster and others published an article in Science examining the "changes in tropical cyclone number, duration, and intensity" over the last 35 years, the period when satellite data has been available. Their main finding was although the number of cyclones decreased throughout the planet excluding the north Atlantic Ocean, there was a great increase in the number and proportion of very strong cyclones.

Both Emanuel and Webster consider sea surface temperatures to be vital in the development of cyclones. Though neither study can directly link hurricanes with global warming, the increase in sea surface temperatures is believed to be due to both global warming and nature variability, e.g. the hypothesized Atlantic Multidecadal Oscillation (AMO), though an exact attribution has not been defined. However, recent temperatures are the warmest ever observed for many ocean basins.

As for statistics, 2005 was the most active hurricane season, when Atlantic water temperatures were the warmest, about 1.4 degrees above normal. That state of things launched a powerful hurricane season with 28 storms and 13 hurricanes. Seven of the hurricanes were major storms.

To compare one may take 1971, when the water temperatures were the coolest, there were 13 storms and six hurricanes, including one major one.