Wild 2 Comet may be asteroid

It turned out that Wild 2 Comet may not be a comet at all, but an asteroid. 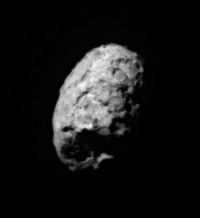 Wild 2 Comet may be asteroid

NASA's Stardust Mission launched a spacecraft, named Stardust, on February 7, 1999. It flew by Wild 2 on January 2, 2004 and collected particle samples from the comet's coma, which were returned to Earth along with interstellar dust collected during the journey.

Stardust's "sample return canister," was reported to be in excellent condition when it landed in Utah, on January 15, 2006. A NASA team analyzed the particle capture cells and removed individual grains of comet and interstellar dust, then sent them to about 150 scientists around the globe.

The most surprising was that a good portion of the dust seemed to have formed close to our own young Sun, rather than originating with other stars or elsewhere in the universe. While comets are generally believed to be a kind of time capsule, holding stardust and other ancient material predating the creation of our own solar system.

The analysis of Wild 2 Comet showed the absence of any of this pre-solar material. So it rather resembles a piece of rock coming from the Asteroid Belt.

Actually it’s hard to identify whether it’s a comet or an asteroid. It comes out of lacking experience and knowledge. There exist a number of objects that share traits once thought to define one or the other, for example a tail of vaporizing ices as an atribute of a comet only.