By Anastasia Tomazhenkova: Far too few adults agree to roll their sleeves and receive a vaccine. U.S. government health officials disappointed. They claim that vaccines are not just for kids. 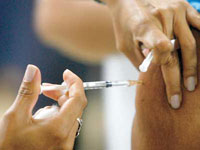 Health officials reported the numbers of newly vaccinated were surprisingly low, considering how much public attention a trio of new shots - which protect against shingles, whooping cough and cervical cancer - received in recent years.

A survey by the National Foundation for Infectious Diseases found that aside from the flu, most adults have trouble even naming diseases that they could prevent with a simple inoculation.

"There are not yet very many adults taking full advantage of the great advancements in prevention that have been made in the past few years," said Dr. Anne Schuchat of the Centers for Disease Control and Prevention. "By skipping vaccination, people are leaving themselves needlessly vulnerable to significant illness, long-term suffering and even death."

- Only about 2 percent of Americans 60 and older received a vaccine against shingles in its first year of sales. Yet there are more than 1 million new cases of shingles, an excruciating rite of aging, each year. Up to 200,000 shingles sufferers get a particularly bad type of nerve pain that can persist for months or even years. Anyone who ever had chickenpox is at risk, especially once they hit their 60s.

- About 2 percent of adults ages 18 to 64 got a booster shot against whooping cough in the two years since it hit the market. The cough so strong it can break a rib is making a big comeback, because the vaccine given to babies and toddlers starts wearing off by adolescence. Older patients usually recover, but whooping cough can cause weeks of misery. Worse, those people can easily spread the illness to not-yet-vaccinated infants, who are at risk of dying from the bacterial infection, also called pertussis.

The booster was added to another shot long recommended for adults, a combination booster against tetanus and diphtheria. The new triple combo is called "Tdap."

- About 10 percent of women ages 18 to 26 have received at least one dose of a three-shot series that protects against the human papillomavirus, or HPV, that causes cervical cancer.

Price has to be part of the reason: The shingles shot costs around $150 (Ђ103), and the three-shot HPV vaccine about $300 (Ђ206), and insurance coverage varies. There is no national program to guarantee access for adults who cannot afford vaccines as there is for child vaccines.

But cost cannot be the main reason: Adults are not taking full advantage of some cheap old standby vaccines, either. CDC found that just 69 percent of seniors get the flu shot; 66 percent have had a one-time pneumonia vaccine; and 44 percent had received a tetanus shot in the past 10 years.

A vaccine is an immunity booster to a certain disease.The term derives from Edward Jenner's use of cowpox ("vacca" means cow in Latin), which, when administered to humans, provided them protection against smallpox, the work which Louis Pasteur and others carried on. Vaccines are based on the concept of variolation originating in China, in which a person is deliberately infected with a weak form of smallpox. Jenner realized that milkmaids who had contact with cowpox did not get smallpox. The process of distributing and administrating vaccines is referred to as vaccination. Since vaccination was much safer, smallpox inoculation fell into disuse and was eventually banned in England in 1848.

How does it work? The immune system recognizes vaccine agents as foreign, destroys them, and 'remembers' them. When the virulent version of an agent comes along the body recognises the protein coat on the virus, and thus prepared to respond, by neutralizing the target agent before it can enter cells, and by recognizing and destroying infected cells before that agent can multiply to vast numbers.