Dell, one of world’s largest sellers of computers and servers, unveiled a new line of blade servers. Official spokespeople for the company said that the new servers would create a fast-growing market that would outstrip Hewlett-Packard and IBM corporations that currently dominate it. 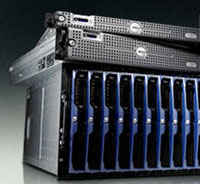 The new PowerEdge M-Series server equipment is expected to be more energy-efficient as opposed to HP’s and IBM’s products.

Dell conducted its most extensive project to develop the blade servers.

Blade servers are self-contained computer servers, designed for high density. Whereas a standard rack-mount server can exist with (at least) a power cord and network cable, blade servers have many components removed for space, power and other considerations while still having all the functional components to be considered a computer. A blade enclosure provides services such as power, cooling, networking, various interconnects and management—though different blade providers have differing principles around what should and should not be included in the blade itself (and sometimes in the enclosure altogether). Together these form the blade system.

Dell's major competitors include Apple, Hewlett-Packard (HP), Sun Microsystems, Gateway, Lenovo, Sony, Acer, Toshiba and Asus. Dell and its subsidiary, Alienware, compete in the enthusiast market against Falcon Northwest, Voodoo PC (a division of HP), and other manufacturers. In the second quarter of 2006 Dell had between 18% and 19% share of the worldwide personal computer market, compared to HP with roughly 15%. By leveraging its business-model, Dell attempts to undercut competitors and offer customers a more attractive choice of personal computers and other equipment.