By Margarita Snegireva. U.S. researchers found out that those pregnant women who avoid caffeine consumption twice reduce the risk of miscarriage that those who do not. 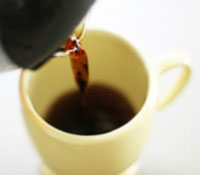 They said the study provides strong evidence that high doses of caffeine during pregnancy - 200 milligrams or more per day or the equivalent of two cups of coffee - significantly increase the risk of miscarriage.

And they said the research may finally put to rest conflicting reports about the link between caffeine consumption and miscarriage.

The precise amount of caffeine necessary to produce effects varies from person to person depending on body size and degree of tolerance to caffeine. It takes less than an hour for caffeine to begin affecting the body and a mild dose wears off in three to four hours. Consumption of caffeine does not eliminate the need for sleep: it only temporarily reduces the sensation of being tired.

With these effects, caffeine is an ergogenic: increasing the capacity for mental or physical labor. A study conducted in 1979 showed a 7% increase in distance cycled over a period of two hours in subjects who consumed caffeine compared to control tests. Other studies attained much more dramatic results; one particular study of trained runners showed a 44% increase in "race-pace" endurance, as well as a 51% increase in cycling endurance, after a dosage of 9 milligrams of caffeine per kilogram of body weight. The extensive boost shown in the runners is not an isolated case; additional studies have reported similar effects. Another study found 5.5 milligrams of caffeine per kilogram of body mass resulted in subjects cycling 29% longer during high intensity circuits.

While relatively safe for humans, caffeine is considerably more toxic to some other animals such as dogs, horses and parrots due to a much poorer ability to metabolize this compound. Caffeine has a much more significant effect on spiders, for example, than most other drugs do.