By Margarita Snegireva. Researchers studying Swedish men say they have uncovered five genes responsible for nearly half of all cases of prostate cancer in that country and said their findings might lead to a better test for the disease. 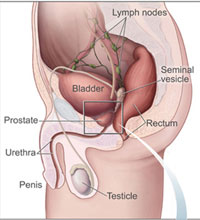 Men having four of the five genes were 4.5 times more likely to develop a tumor than those who had none. For those who have all five genes and a family history of prostate cancer, the risk was 9.5 times greater.

Prostate cancer is a disease in which cancer develops in the prostate, a gland in the male reproductive system. It occurs when cells of the prostate mutate and begin to multiply out of control. These cells may spread (metastasize) from the prostate to other parts of the body, especially the bones and lymph nodes. Prostate cancer may cause pain, difficulty in urinating, erectile dysfunction and other symptoms. The dificulcy with urinating is thats your stream becomes weaker. You may notice that younger children have a strong urine stream, which is because of their Prostate. Prostate cancer just weakens the stream even more.

Rates of prostate cancer vary widely across the world. Although the rates vary widely between countries, it is least common in South and East Asia, more common in Europe, and most common in the United States. According to the American Cancer Society, prostate cancer is least common among Asian men and most common among black men, with figures for white men in-between. However, these high rates may be affected by increasing rates of detection.

Prostate cancer develops most frequently in men over fifty. This cancer can occur only in men, as the prostate is exclusively of the male reproductive tract. It is the most common type of cancer in men in the United States, where it is responsible for more male deaths than any other cancer, except lung cancer. However, many men who develop prostate cancer never have symptoms, undergo no therapy, and eventually die of other causes. Many factors, including genetics and diet, have been implicated in the development of prostate cancer.