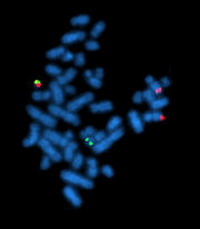 In February 2007, the MammaPrint test became the first breast cancer predictor to win formal approval from the Food and Drug Administration. This is a new gene test to help predict whether women with early-stage breast cancer will relapse in 5 or 10 years, this could help influence how aggressively the initial tumor is treated.

But there appeared a new revolutionary test – the TOP2A FISH pharmDx. FDA has approved and evaluated it as the first device to test for the TOP2A (topoisomerase 2 alpha) gene in cancer patients.

The approval of the new technique was based on a study of tumor samples and clinical evaluation of 767 Danish women with breast cancers with a high risk of recurrence.

TOP2A FISH pharmDx uses FISH (Fluorescent in situ hybridization) - a cytogenetic technique that can be used to detect and localize the presence or absence of specific DNA sequences on chromosomes. (In this case any abnormalities in TOP2A, a gene that takes part in DNA replication.) It uses fluorescent probes that bind to only those parts of the chromosome with which they show a high degree of sequence similarity. Fluorescence microscopy can be used to find out where the fluorescent probe bound to the chromosome. FISH is often used for finding specific features in DNA.

In evaluation of cancer remission a traditional exam involving metaphase chromosome analysis is often unable to identify features that distinguish one disease from another, due to subtle chromosomal features; FISH can elucidate these differences. FISH can also be used to detect diseased cells more easily than standard Cytogenetic methods, which require dividing cells and requires labor and time-intensive manual preparation and analysis of the slides by a technologist. FISH, on the other hand, does not require living cells and can be quantified automatically, a computer counts the fluorescent dots present. However, a trained technologist is required to distinguish subtle differences in banding patterns on bent and twisted metaphase chromosomes.