Cholesterol-lowering statin recommended to all diabetics

By Margarita Snegireva. A group of British and Australian investigators said the largest study of its kind, involving a pooled analysis of clinical trials involving nearly 19,000 patients with diabetes, found there was a clear benefit in taking statins. 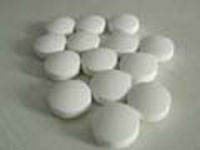 Cholesterol-lowering statin recommended to all diabetics

After five years, 42 fewer people with diabetes had major vascular events, such as heart attacks and strokes, for every 1,000 allocated statin therapy.

The statins (or HMG-CoA reductase inhibitors) form a class of hypolipidemic drugs used to lower cholesterol levels in people with or at risk of cardiovascular disease. They lower cholesterol by inhibiting the enzyme HMG-CoA reductase, which is the rate-limiting enzyme of the mevalonate pathway of cholesterol synthesis. Inhibition of this enzyme in the liver stimulates LDL receptors, resulting in an increased clearance of low-density lipoprotein (LDL) from the bloodstream and a decrease in blood cholesterol levels. The first results can be seen after one week of use and the effect is maximal after four to six weeks.