US scientists prove:breast cancer gene not that dangerous

By Margarita Snegireva. Scientists proved that certain gene mutations that previously were believed to increase breast-cancer risk are less dangerous. 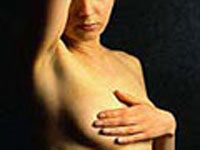 US scientists prove:breast cancer gene not that dangerous

A study in this week's Journal of the American Medical Association estimates that women carrying mutations in one of two genes face a variable 40-51% risk of developing breast cancer by age 70, lower than the commonly cited 50%-80% risk. The study was sponsored by the National Cancer Institute.

Breast cancer is a cancer of the glandular breast tissue.

The number of cases worldwide has significantly increased since the 1970s, a phenomenon partly blamed on modern lifestyles in the Western world. Because the breast is composed of identical tissues in males and females, breast cancer also occurs in males, though it is less common