By Margarita Snegireva. Researches in University of Minnesota are working on an antidote to cyanide. The antidote tested on mice proved to be effective. It will be tested on humans within three years. 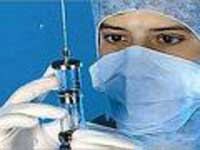 The human body is able to naturally detoxify the body from small doses of cyanide, which is commonly found in pitted fruits and other foods. Researcher Steven Patterson says the antidote will work together with the body to provide protection from the toxin.

A cyanide is any chemical compound that contains the cyano group (C≡N), which consists of a carbon atom triple-bonded to a nitrogen atom. Cyanide specifically is the anion CN-. Many organic compounds feature cyanide as a functional group; these are called nitriles in IUPAC nomenclature (for example, CH3CN is referred to by the names acetonitrile or ethanenitrile per IUPAC, but occasionally it is labeled using the common name methyl cyanide). Of the many kinds of cyanide compounds, some are gases, others are solids or liquids. Some are molecular, some ionic, and many are polymeric. Those that can release the cyanide ion CN- are highly toxic.

The word "cyanide" comes from the Greek word for "blue", in reference to HCN, which was called Blausäure ("blue acid") in German after its preparation by acid treatment of Prussian blue.

Cyanides have been used as a poison many times throughout history. Its most infamous application was the use of hydrogen cyanide by the Nazi regime in Germany for mass murder in some gas chambers during the Holocaust. Cyanide has been used for murder, as in the case of Rasputin. It has also been used for suicide. Some notable cases are Erwin Rommel, Eva Braun, Adolf Hitler, Wallace Carothers, Hermann Göring, Heinrich Himmler, Alan Turing, and Odilo Globocnik. Cyanide is also a very common poison in crime fiction.