New Era Canning Company had to recall 1,026 cans of green beans because they may be contaminated with bacteria that cause botulism. 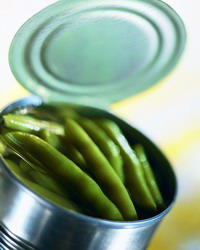 The canned green beans were distributed in Alabama, Arkansas, Georgia, Illinois, Indiana, Kentucky, Mississippi, Missouri, North Carolina, Tennessee, and Virginia. The potential contamination was found thanks to testing led by the Food and Drug Administration.

Botulism (Latin, botulus, "sausage") is a rare, but serious paralytic illness caused by a nerve toxin, botulin, that is produced by the bacterium Clostridium botulinum. Botulinic toxin is one of the most powerful known toxins: about one microgram is lethal to humans. It acts by blocking nerve function and leads to respiratory and musculoskeletal paralysis.

There are three main kinds of botulism, but in this case we come across the Foodborne botulism caused by eating foods that contain the botulinum toxin.

Classic symptoms of food-borne botulism usually occur between 12–36 hours after consuming the botulinum toxin. However, they can occur as early as 6 hours or as late as 10 days after.

Wound botulism has a longer incubation period, usually between 4–14 days.

Common symptoms of either form usually include dry mouth, difficulty swallowing, slurred speech, drooping eyelids, muscle weakness, double and/or blurred vision, vomiting, bladder and sometimes diarrhea. These symptoms may progress to cause paralytic ileus with severe constipation, and eventually body paralysis. The respiratory muscles are affected as well, which may cause death due to respiratory failure. These are all symptoms of the muscle paralysis caused by the bacterial toxin.

In all cases illness is caused by the toxin made by C. botulinum, not by the bacterium itself. The pattern of damage occurs because the toxin affects nerves that are firing more often.

New Era Canning Company’s consumers should throw contaminated cans and food away immediately and carefully. Even small amounts of the toxin ingested, inhaled, or absorbed through the eye or a break in the skin can cause serious illness; skin contact should be avoided and hands should be washed immediately after handling the food.

U.S. Food and Drug Administration and the Michigan Department of Agriculture now try to determine the cause of the problem.