By Margarita Snegireva. Researchers have found out that 1.8 lives of motorists are saved due to marathon –related road closures, for every runner who drops dead in a race. 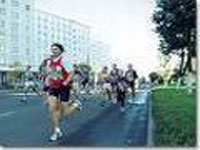 Heart stoppage killed 26 marathoners during races in the U.S. over the past 30 years, but Donald A. Redelmeier, M.D., and J. Ari Greenwald, of the University of Toronto , found 46 fewer motor vehicle fatalities than expected while the races were underway.

A study published in 1996 found that the risk of having a fatal heart attack during, or in the period 24 hours after, a marathon, was approximately 1 in 50,000 over an athlete's racing career - which the authors characterised as an "extremely small" risk. The paper went on to say that since the risk was so small, cardiac screening programs for marathons were not warranted. However, this study was not an attempt to assess the overall benefit or risk to cardiac health of marathon running.

In 2006, a study of 60 non-elite marathon participants tested runners for certain proteins which indicate heart damage or dysfunction after they had completed the marathon, and gave them ultrasound scans before and after the race. The study revealed that, in that sample of 60 people, runners who had done less than 35 miles per week training before the race were most likely to show some heart damage or dysfunction, while runners who had done more than 45 miles per week training beforehand showed little or no heart problems.

It should be emphasised that regular exercise in general provides a range of health benefits, including a substantially reduced risk of heart attacks. Moreover, these studies only relate to marathons, not to other forms of running. It has been suggested that as marathon running is a test of endurance, it stresses the heart more than shorter running activities, and this may be the reason for the reported findings.

In 2007, Ryan Shay, a 28 year-old elite long-distance runner, passed away after collapsing early in the US Olympic marathon trials. His death was reported as probably due to a pre-existing heart abnormality.

"For each person who died from sudden cardiac death, we estimated a ratio of almost two lives saved from fatal crashes that would otherwise have occurred," they wrote in the Dec. 22 issue of the BMJ. This annual end-of-year issue of BMJ is renowned for off-beat or humorous research results, albeit legitimate.

The comparison may seem frivolous, but Dr. Redelmeier and Greenwald pointed out that it contained serious lessons for race planners, medical professionals, and society.

"The results highlight the ongoing frequency of road crashes and how brief changes in driving can lead to a measurable reduction in health losses," they said.