A six-year-old Minnesota girl who had part of her intestinal tract torn out by powerful suction from a wading pool drain has had a transplant operation. 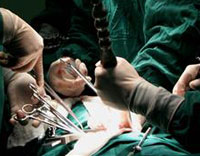 Abigail Taylor of Edina is recovering at the Nebraska Medical Center in Omaha after Monday's transplant operation for a small bowel, liver and pancreas.

Organs that can be transplanted are the heart, kidneys, liver, lungs, and pancreas. Tissues include bones, tendons, cornea, heart valves, veins and skin.

French doctors performed the world's first facial transplant Tuesday, on a woman who was disfigured by a dog attack. The high-risk operation has raised a storm of ethical questions and garnered guarded praise. Doctors have performed the world's first partial face transplant, grafting a nose, lips and chin onto a 38-year-old woman disfigured by a dog attack, French hospitals said Wednesday.

The surgery was performed Sunday in Amiens, northern France, according to a joint statement from the Amiens hospital and another in the southern city of Lyon, whose doctors worked together.

"The patient's general condition is excellent and the transplant looks normal," the statement said. It said the woman wants to remain anonymous. The donor, a woman, was brain dead, and her family consented to the surgery, the statement said.