(by Margarita Snegireva) Drinking several cups of green tea every day may help keep prostate cancer from spreading, according to a study funded by the Japanese government. 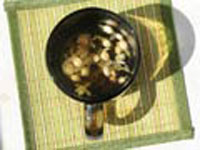 The study, carried out between 1990 and 2004 and released Wednesday, was the first to suggest green tea can help keep prostate cancer from spreading, the center said.

Prostate cancer is a disease in which cancer develops in the prostate, a gland in the male reproductive system . It occurs when cells of the prostate mutate and begin to multiply out of control. These cells may spread ( metastasize ) from the prostate to other parts of the body, especially the bones and lymph nodes. Prostate cancer may cause pain, difficulty in urinating, erectile dysfunction and other symptoms.

Rates of prostate cancer vary widely across the world. Although the rates vary widely between countries, it is least common in South and East Asia, more common in Europe, and most common in the United States. According to the American Cancer Society, prostate cancer is least common among Asian men and most common among black men, with figures for white men in-between. However, these high rates may be affected by increasing rates of detection.

Prostate cancer can be treated with surgery, radiation therapy,hormonal therapy, occasionally chemotherapy, proton therapy, or some combination of these. The age and underlying health of the man as well as the extent of spread, appearance under the microscope, and response of the cancer to initial treatment are important in determining the outcome of the disease. Since prostate cancer is a disease of older men, many will die of other causes before a slowly advancing prostate cancer can spread or cause symptoms. This makes treatment selection difficult. The decision whether or not to treat localized prostate cancer (a tumor that is contained within the prostate) with curative intent is a patient trade-off between the expected beneficial and harmful effects in terms of patient survival and quality of life.

Recently the scientists have begun to regard green tea as possible means of preventing cancer. Green tea is a "true" tea, meaning it is made solely with the leaves of Camellia sinensis, that has undergone minimal oxidation during processing. Green tea originates from China and has become associated with many cultures in Asia from Japan to the Middle East. Recently, it has become more widespread in the West, where black tea is traditionally consumed. Many varieties of green tea have been created in countries where it is grown that can differ substantially due to variable growing conditions, processing and harvesting time. Over the last few decades green tea has begun to be subjected to many scientific and medical studies to determine the extent of its long purported health benefits, with some evidence suggesting regular green tea drinkers may have lower chances of heart disease and contracting certain types of cancer.