Stem cell research is one of the most fascinating areas of biology today. But like many expanding fields of scientific inquiry, research on stem cells raises scientific questions as rapidly as it generates new discoveries. 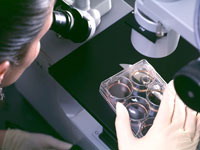 This field gives knowledge about how an organism develops from a single cell and how healthy cells replace damaged cells in adult organisms. This promising area of science is also leading scientists to investigate the possibility of cell-based therapies to treat disease, which fall into the group of regenerative or reparative medicine.

Stem cells are cells found in all multi-cellular organisms. They retain the ability to renew themselves through mitotic cell division and can differentiate into a diverse range of specialized cell types. Research in the stem cell field grew out of findings by Canadian scientists Ernest A. McCulloch and James E. Till in the 1960s. The two broad types of mammalian stem cells are: embryonic stem cells that are found in blastocysts, and adult stem cells that are found in adult tissues. In a developing embryo, stem cells can differentiate into all of the specialized embryonic tissues. In adult organisms, stem cells and progenitor cells act as a repair system for the body, replenishing specialized cells, but also maintain the normal turnover of regenerative organs, such as blood, skin or intestinal tissues.

As stem cells can be grown and transformed into specialized cells with characteristics consistent with cells of various tissues such as muscles or nerves through cell culture, their use in medical therapies has been proposed. In particular, embryonic cell lines, autologous embryonic stem cells generated through therapeutic cloning, and highly plastic adult stem cells from the umbilical cord blood or bone marrow are touted as promising candidates

Medical researchers believe that stem cell therapy has the potential to change radically the treatment of human disease. A number of adult stem cell therapies already exist, particularly bone marrow transplants that are used to treat leukemia. In the future, medical researchers anticipate being able to use technologies derived from stem cell research to treat a wider variety of diseases including cancer, Parkinson's disease, spinal cord injuries, and muscle damage, amongst a number of other impairments and conditions. However, there still exists a great deal of social and scientific uncertainty surrounding stem cell research, which could possibly be overcome through public debate and future research.

Opponents of the research argue that embryonic stem cell technologies are a slippery slope to reproductive cloning and can fundamentally devalue human life. Those in the pro-life movement argue that a human embryo is a human life and is therefore entitled to protection.

Contrarily, supporters of embryonic stem cell research argue that such research should be pursued because the resultant treatments could have significant medical potential. It is also noted that excess embryos created for in vitro fertilisation could be donated with consent and used for the research.

The ensuing debate has prompted authorities around the world to seek regulatory frameworks and highlighted the fact that stem cell research represents a social and ethical challenge.