Scientists manage to ease symptoms of muscular dystrophy in mice

Symptoms of muscular dystrophy in mice were eased by injecting modified stem cells from human patients. 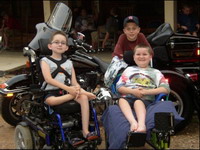 Scientists manage to ease symptoms of muscular dystrophy in mice

The mice showed stronger muscles and ran longer on a treadmill than diseased mice that were not treated.

Other experimental treatments for muscular dystrophy have also produced encouraging results in lab animals. Last year, for example, scientists reported improvements in golden retrievers that had received stem cells from other dogs.

The new study involved not only using stem cells, but also modifying those cells to affect how they read their DNA.

The paper focused on Duchenne muscular dystrophy, a muscle-wasting genetic disorder appearing in boys that occurs in about 1 in every 3,500 male births. It's the most severe and most common childhood form of muscular dystrophy.

Boys with Duchenne dystrophy have trouble walking as early as preschool, and nearly all of them lose their ability to walk between ages 7 and 12. Typically, they die in their 20s because of weakness in their heart and lung muscles. There is no known cure.

The idea of treating people with their own cells is attractive because their bodies would not be expected to reject the cells as foreign. So they would not have to take drugs to prevent rejection.

The new study used stem cells taken from the muscle of Duchenne patients. These "adult" cells differ from embryonic stem cells, which are controversial because scientists must destroy embryos to harvest them.

The work is published in the December issue of Cell Stem Cell by scientists from the University of Milan in Italy, and elsewhere. It used mice that had a version of Duchenne and whose immune systems don't reject foreign tissue.

Duchenne is caused by a mutated gene that prevents cells from producing a crucial protein. So just putting stem cells from patients with the faulty gene into the mice would not have done any good. Instead, researchers treated the cells to make them ignore the mutation. As a result, they produced a shortened but functioning version of the protein.

This approach, called exon-skipping, is now being studied in early human experiments that seek to deliver the treatment within a Duchenne patient's body.

In the mouse study, the cells were treated outside the body. Scientists injected the treated cells into the bloodstreams of six mice. The cells settled near muscle damaged by the disease, and researchers later found the human protein in some mouse muscle fibers.

Lab tests showed that leg muscles removed from the treated mice were stronger than those from untreated mice, although they remained weaker than normal. A treadmill study of four mice found that the treatment prolonged running time before exhaustion, but again not to the level of healthy mice.

The work is "a nice demonstration of a lot of cutting-edge techniques used together and effectively," said Sharon Hesterlee of the Muscular Dystrophy Association, which was not involved with the study.

Scientists now must improve the technique and test the approach in larger animals, she said.