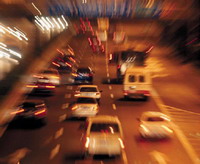 The ruling by U.S. District Court Judge Anthony Ishii clears one of the hurdles in California's effort to regulate tailpipe emissions from cars, trucks and sports utility vehicles.

Automakers sued the state over the tailpipe standards it approved in 2004, which would force automakers to build cars and light trucks that produce about 30 percent fewer greenhouse gases by 2016.

However, the state still needs a waiver from the U.S. Environmental Protection Agency to begin implementing the program. The EPA has not yet issued a decision. California and 14 other states sued the agency in November seeking quicker action.

"It's a major victory and a giant step forward for California," California Attorney General Jerry Brown said of Wednesday's ruling. "I hope this will get the attention of President (George W.) Bush and have him support significant caps on greenhouse gas emissions."

In its lawsuit against the state, the auto industry argued that California did not have the authority to set its own standards because it would force manufacturers to produce vehicles using too many different fuel efficiency standards.

But Ishii rejected that claim, saying Congress gave California and the EPA the authority to regulate vehicle emissions, even if those rules are more strict than those imposed by the federal government.