One can get a vast new energy supply by feeding fertilizer to some deep-dwelling, gas-making microbes. 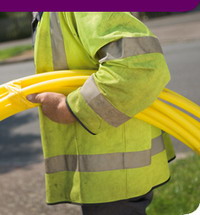 Canadian and English researchers were able to convert oil into usable methane in small glass tubes during two years of lab research, instead of a process that takes tens of thousands of years underground. The next step is to do it in real oil fields.

The new method takes advantage of the natural process that occurs when microbes slowly degrade oil into methane, the chief ingredient in natural gas.

The researchers report their experiment in a study published online Wednesday in the journal Nature.

"You're talking a very substantial amount of energy," said study co-author Steve Larter, a University of Calgary petroleum geologist. "It's potentially a game changer if it can be demonstrated."

Proving that it could work on a large scale, economically and in real world conditions is the big unknown, the researchers concede.

Larter said it was hard to come up with just how much energy they could produce, but speculated it could be near the equivalent of the world's conventional oil reserves.

The key is the microbes, which have existed underground for hundreds of millions of years. They ferment the oil and expel natural gas without requiring oxygen.

Others have tried the approach used by Larter and his colleagues before, seeking to speed up the process by injecting more bacteria. But Larter says the key is giving the microbes their own version of vitamins.

"You'd basically feed them Miracle-Gro or fertilizer to accelerate their growth rate," he said.

The new product would be natural gas, not oil, a cleaner-burning fuel that contributes far less to global warming. Such an approach would be most promising in places with heavy oil, such as Alberta, Venezuela and Utah, other experts said.

The concept makes sense and is already being applied to getting methane from coal beds, said U.S. Geological Survey research geochemist Michael Lewan, who was not part of the Larter study team.