The government is questioning if too many of the wrong people will take cholesterol-lowering Mevacor if it's sold without a prescription, days before Merck & Co. makes its third try to move the drug over the counter. 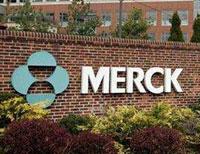 Merck says selling a low dose of this long-used medication on drugstore shelves, next to the aspirin, could get millions of people at moderate risk of heart disease important treatment that they otherwise may miss.

A preliminary Food and Drug Administration review released Tuesday agreed that nonprescription Mevacor would be "a reasonably safe and effective" option — if consumers used it as directed, the AP reports.

Merck & Co., Inc., also known as Merck Sharp & Dohme or MSD outside the USA and Canada, is one of the largest pharmaceutical companies in the world. The headquarters of the company is located in Whitehouse Station, NJ. It was established in 1891 as the United States subsidiary of the German company now known as Merck KGaA. In common with many other German assets in the United States, Merck & Co. was confiscated in 1917 during World War I and set up as an independent company. It is currently one of the top 7 largest pharmaceutical companies in the world both by capital and revenue.

As Pravda.Ru previously reported It is believed that non-cholesterol diet keeps away from heart and vessel diseases. Doctor of biological sciences, leading research assistant at the Moscow Immunology Institute Olga Zaikina speaks on the issue.

It is for about one hundred of years already that cholesterol has been declared the cause of atherosclerosis, stenocardia and heart attacks. However, introduction of a non-cholesterol diet is not always a success, because human organisms also produce cholesterol in addition to the one they get from food.

What is more, cholesterol is not always dangerous and unhealthy. There is some cholesterol that prevents atherosclerosis.

- Do you mean that much cholesterol in blood is not always harmful?