When a recording reminds, even people who rarely exercise can be persuaded to get off the couch. 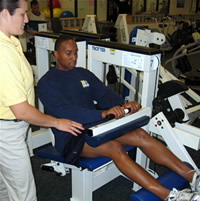 Researchers at Stanford University, who studied sedentary people for a year, found that automated exercise reminder phone calls had about the same get-up-and-go power as calls from human counselors.

"The recording had a very nice, kind of cheerleader voice. It sounded very natural," said study participant Rita Horiguchi, who was initially disappointed to be assigned to get computer calls. "She would say things like, 'That's very good. I think you can go a little farther next week.' So I would do a little bit more."'

Horiguchi was one of 218 adults over 55 in the San Francisco Bay area who took part in the study, known as Community Health Advice by Telephone, or CHAT. The goal was to get them out walking at a brisk pace for 30 minutes most days, or engage in some other medium-intense activity, for a total of about 150 minutes a week.

The group was divided into three: people who got no calls, people who were called by trained health educators and people who got computer calls. The automated calls were interactive - for instance, asking participants to press "1" if they reached their goals in the previous week - and participants got prerecorded advice on how to overcome challenges.

Exercise levels were measured with devices that estimate physical activity and intensity.

After a year, both of the called groups were topping 150 minutes of exercise a week. Those who got computer calls averaged 157 minute while human-called participants logged an average 178 minutes. The no-call group averaged only 118 minutes.

Results of the study, funded by the National Institute on Aging, are in the current issue of the journal Health Psychology.