New Toyota robot plays "Pomp and Circumstance" on the violin, a little artificially, if compared to a virtuoso. 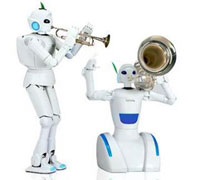 The 152-centimeter (five-foot)-tall all-white robot, shown Thursday, used its mechanical fingers to push the strings correctly and bowed with its other arm, coordinating the movements well.

Toyota Motor Corp. has already shown robots that roll around to work as guides and have fingers dexterous enough play the trumpet.

Toyota President Katsuaki Watanabe said robotics will be a core business for the company in coming years. Toyota will test out its robots at hospitals, Toyota-related facilities and other places starting next year, he said. And the company hopes to put what it calls "partner robots" to real use by 2010, he said.

"We want to create robots that are useful for people in everyday life," he told reporters at a Toyota showroom in Tokyo .

Watanabe and other Toyota officials said robotics was a natural extension of the automaker's use of robots in manufacturing, as well the development of technology for autos related to artificial intelligence, such as sensors and pre-crash safety systems.

Watanabe presented a picture of the future, in which wheelchair-like "mobility robots," which Toyota also displayed Thursday, would offer "bed-to-bed" services to people, including the elderly and the sick, just like cars take people "door-to-door."

At the demonstration, a man got on a mobility robot, a motorized two-wheeled chair, and then scooted around. Toyota showed how the moving machine could go up and down slopes, and go over bumps, without upsetting the person sitting on the chair, because the wheels could adjust to such changes.

The Japanese automaker, which makes the Prius hybrid, best-selling Camry sedan and Lexus luxury model, has been a latecomer in robots compared to its domestic rival Honda Motor Co.

Honda is showing the latest technology in its own robot - the Asimo humanoid - next week.

Honda has been working on robots since 1986, recognizing the technology as critical for its future in delivering mobility for the future age.

Asimo - a name based on the Japanese word for "legs" - first became available for rental in 2000, and is considered one of the world's most advanced humanoids. Seen often at Honda and other events, it can walk, even jog, wave, avoid obstacles and carry on simple conversations.

The 130-centimeter-tall (51-inch)-tall bubble-headed Asimo looks like a real-life child in a white space-suit, as it has grown smaller and lighter in size with innovations over the years.

Vying to one-up its rival, Toyota has been aggressively beefing up its robotics team, recently inviting engineers from Japanese electronics and entertainment company Sony Corp., which discontinued its Aibo dog-like robot last year.

Toyota Executive Vice President Takeshi Uchiyamada declined to comment on which robot was superior, Toyota's or Honda's, saying he did not know enough about Asimo.

Toyota said it is working with universities and its group companies to speed up robotics development, but ruled out a collaboration with Honda for the time being.