Finally some light may be shed upon Cypriots and the ancient life on the whole. 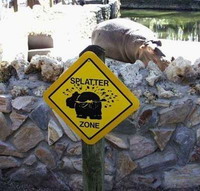 Cypriot and Greek scientists are trying to unravel the riddle of a collapsed cave brimming with the fossilized remains of extinct dwarf hippopotamuses that were descendants of a group believed to have migrated here as far back as a quarter million years ago.

Paleontologists have unearthed an estimated 80 dwarf hippopotamuses in recent digs at the site located just outside the resort of Ayia Napa on the island's southeastern coast.

But possibly hundreds more may be lying beneath an exposed layer of jumbled fossils embedded in the crevices of an ancient coral reef formation that now overlooks the coastline.

Scientists hope the new fossil haul dated to 9,000-11,500 B.C. could offer vital clues to solving the long-standing quandary over when humans first set foot on this east Mediterranean island.

"It's about our origins," said Ioannis Panayides, the Cyprus Geological Survey Department official in charge of excavations carried out in conjunction with the University of Athens. "Knowledge of our geological history makes us more knowledgeable about ourselves."

Until the Ayia Napa discovery, the earliest trace of humans on the island dated back to 8,000 B.C. But signs of human activity like stone tools and the remains of fires at the cave could turn back the clock on the first Cypriots by as much as 3,500 years.

"That's very significant, but we can't be certain yet. The task of examining is laborious and time consuming," said University of Athens Professor George Theodorou tasked with examining some 1.5 tons of fossils.

The dwarf hippopotamuses were herbivores just like their modern-day cousins but only a fraction of their size, measuring roughly 0.70 meters (2.3 feet) tall and 1.2 meters (3.9 feet) long.

Their physical traits also differed. Unlike modern hippos whose upturned nostrils that sit high up on the snout are appropriate for swimming, Cypriot hippos had lower-slung nostrils better suited to foraging on land.

According to Panayides, the fossils show the Cypriot hippos had legs and feet adapted to land rather than water, enabling them to stand on their hind legs to reach low-lying tree branches.

Panayides explained that was the result of a "remarkably swift" evolutionary adaptation to their new environment - a characteristic shared by dwarf hippos unearthed in other Mediterranean, islands including Sicily and Crete.

Hippos arrived in Cyprus in more familiar dimensions between 100,000 to 250,000 ago, but they likely shrank to adapt to a more hilly island landscape. A reliance on footpower to secure their next meal prompted the massive girth reduction.

Scientists are also perplexed as to just how hippos arrived on an island that has never been physically linked to another land mass.

Panayides said paleontologists theorize the hippos may have either swum or floated here from what is now Turkey to the north and Syria to the east during a Pleistocene ice age. They may have clung onto tree trunks and other debris during the crossing.

Lower sea levels at the time mean the island was much larger than its present-day 9,250 square kilometers (about 3570 square miles), so it was significantly closer to neighboring land masses. By some estimates, what is now Syria was a mere 30 kilometers (18 miles) away - less than a third of its present-day distance.

Digs over the last century uncovered dwarf hippo fossils - and in much lesser quantities the fossilized remains of dwarf elephants - at 40 separate locations across the island.

One such cave discovered in Akrotiri west of the southern coastal resort of Limassol some 20 years ago produced evidence of fire, stone tools and scorched bones indicating the dwarf hippos were hunted by what are believed to be the earliest humans to inhabit the island.

Carbon dating on hippo fossils found there showed the site dates back to 8,000 B.C. Evidence of human activity at Ayia Napa means the island may have been settled by sea-faring humans as much as 3,500 years before the current scientific consensus.

A human footprint at the Ayia Napa site could bolster the theory that the island's earliest inhabitants could have driven the dwarf hippos to extinction through hunting, said Panayides.

"If these new bones are found to be older than bones previously discovered and scientists can find an association with humans, then the discovery has the potential to tell us more about the island's first human inhabitants," said Eleanor Weston, a paleontologist at London's Natural History Museum who was not connected with the Ayia Napa discovery.

Panayides said indications that hippo bones at the Ayia Napa cave had been crushed as if trampled on by other hippos compounds the mystery as to why successive generations kept coming back to the cave.

Shelter is the most likely explanation, but Panayides didn't rule out the possibility the hippos returned to an ancient burial ground to die.

Panayides said it is hoped that DNA could be extracted to determine the hippos' exact origins.