Researchers studying the collective behavior of insects created tiny robots programmed to act like roaches, and they were able to blend into cockroach society. 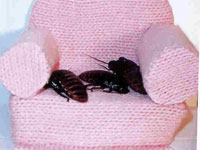 Cockroaches tend to self-organize into leaderless groups, seeming to reach consensus on where to rest together.

For example, when provided two similar shelters, most of the group tended to gather under the same one.

Hoping to learn more about this behavior, researchers led be Jose Halloy at the Free University of Brussels, Belgium, designed small robots programmed to act like a cockroach.

The robots did not look like the insects and at first the roaches fled from them, but after the scientists coated the robots with pheromones that made them smell like roaches the machines were accepted into the group, nesting together with the insects.

Given a choice, roaches generally prefer a darker place and the robots were programmed to do the same.

Then, to see if the robots had really become part of society and could influence group decisions, Halloy and colleagues programmed them to prefer shelters with more light.

On the other hand, in 39 percent of cases the robots, despite being programmed to prefer a lighter shelter, joined the cockroaches under the darker one.

The findings were reported in Friday's issue of the journal Science.