Scientists have discovered a new dinosaur with mouth parts designed to suck up food. 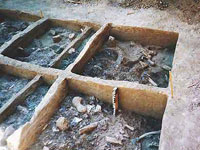 The 110 million-year-old plant eater, discovered in the Sahara Desert, was to be unveiled Thursday by the National Geographic Society.

Sereno, a National Geographic explorer-in-residence and paleontologist at the University of Chicago, said the first evidence of Nigersaurus was found in the 1990s and now researchers have been able to reconstruct its skull and skeleton.

While Nigersaurus' mouth is shaped like the wide intake slot of a vacuum, it has something lacking in most cleaners - hundreds of tiny, sharp teeth to grind up its food.

The 30-foot-long Nigersaurus had a feather-light skull held close to the ground to graze like an ancient cow. Sereno described it as a younger cousin of the North American dinosaur Diplodicus.

Its broad muzzle contained more than 50 columns of teeth lined up tightly along the front edge of tis jaw. Behind each tooth more were lined up as replacements when one broke off.

Using CT scans the researchers were able study the inside of the animal's skull where the orientation of canals in the organ that helps keep balance disclosed the habitual low pose of the head, they reported.

Nigersaurus also had a backbone consisting of more air than bone.

"The vertebrae are so paper-thin that it is difficult to imagine them coping with the stresses of everyday use - but we know they did it, and they did it well," Jeffrey Wilson, assistant professor at the University of Michigan and an expedition team member, said in a statement.

The dinosaur's anatomy and lifestyle were to be detailed in the Nov. 21 issue of journal PLoS ONE, the online journal from the Public Library of Science, and in the December of National Geographic magazine.

The first bones of Nigersaurus were picked up in the 1950s by French paleontologists, but the species was not named at that time. Sereno and his team honored this early work by naming the species after Taquet.

The research was partly funded by National Geographic.