The United States and European Union prevent Brazil from including biofuels among the "environmental goods" whose tariffs would be significantly reduced or eliminated as part of a new global commerce pact. 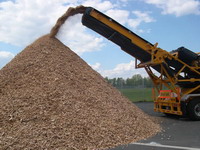 Brazil, which would reap billions of dollars in revenue from widespread ethanol liberalization, made the proposal at the World Trade Organization last week, said officials who were present at the closed-door meeting.

But the offer was rebuffed by American and European delegates, who said that the special environmental tariff rules were reserved solely for industrial goods, and not agricultural products, said the trade officials, who spoke on condition of anonymity because of WTO confidentiality rules.

Brazil has been touting its sugarcane-based ethanol around the world as a cheap, eco-friendly alternative to fossil fuels amid soaring oil prices and global warming concerns. While its business is booming, Brazil says exports have been held back by high U.S. and European tariffs.

Critics say U.S. and EU ethanol tariffs are in place to protect American and European farmers who cannot produce the fuel as cheaply as in Latin America's largest nation. Brazil could become the world's undisputed ethanol superpower because its sugarcane is more efficient for ethanol production than the corn used to make the fuel in the United States and the sugarbeet used by European countries.

Greater access and lower prices for technologies like solar and wind has always been a U.S. priority in the WTO's struggling six-year trade round, said an official with the U.S. Trade Representative in Washington. But negotiations have failed to produce agreement on what constitutes an environmental good, and there is no consensus on biofuels, said the USTR official in an e-mailed statement.

The Doha round aims to add billions of dollars to the world economy and lift millions of people out of poverty through free trade. But it has repeatedly stalled since its inception in Qatar's capital in 2001, largely because of wrangling between rich and poor nations over eliminating farm subsidies and, more recently, barriers to manufacturing trade.

Negotiators have been trying to agree on the blueprint of a deal that would free up agricultural, industrial and services trade by the end of the year, but will almost certainly miss that target.

The environmental exceptions were originally created as a green incentive to accompany greater manufacturing liberalization, but South American countries in particular are asking that farm products also be singled out for special treatment.

At the meeting last week, Peru made a request for lower tariffs on organic farm goods that was also rejected by Washington and Brussels, according to officials.

They said Brazil found the resistance to biofuels unfair because Washington is recommending their use as part of its Corporate Average Fuel Economy standards, while the 27-nation EU has done the same in a 2003 directive.

While the U.S. claimed that ethanol and other biofuels belonged to agriculture, it recently made a different claim in a WTO farm dispute with Brazil, which had argued that payments for U.S. ethanol production were farm subsidies.

The United States is the world's biggest ethanol producer, making its fuel primarily from corn. President George W. Bush has made ethanol a central part of his plan to cut gasoline use by 20 percent, and has sent Congress a proposal mandating the use of 35 billion gallons (132 billion liters) a year of "alternative" fuels, mostly ethanol, by 2017.

An EU official said Monday the bloc was prepared to open markets to more sugarcane ethanol, as required by the farm provisions of a final Doha treaty, but added that it was important the fuel is produced in a sustainable manner.