Rudy Giuliani defends the survival rates he quotes when talking about his prostate cancer. 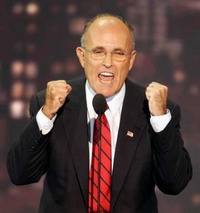 The American Cancer Society says the survival rates are actually higher and it is misleading to compare the two countries.

Regardless, Giuliani said Friday, his point is clear.

"Even if you want to quibble about the statistics, you find me the person who leaves the United States and goes to England for prostate cancer treatment, and I'd like to meet that person," he told reporters in Washington.

The American Cancer Society says five-year survival rates were 95 percent in the U.S. and 60 percent in the United Kingdom, which includes Britain, in 1993-1995, the most recent time period with data to compare.

Moreover, experts from the American Cancer Society say it is misleading to compare the countries at all.

American men are far more likely to undergo screening tests that detect the disease in its earliest stages. That means U.S. survival rates include many men whose lives probably were not in danger - and whose cancers may never have been noticed in the United Kingdom.

Giuliani defended his figures as "absolutely accurate" at the time of his prostate cancer treatment in 2000. "Those statistics have changed slightly today," he said Friday.

The former New York mayor got his numbers from the City Journal, a quarterly magazine published by the conservative Manhattan Institute think tank.