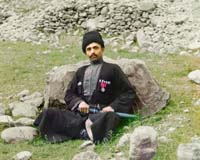 A taxi was blown up by a suicide bomber in Russia’s Dagestan , five people were injured.

A regional police spokesman said the explosive device was attached to the woman's belt and detonated when the door to the taxi - a minibus seating several passengers - closed.

It was not clear whether the blast was accidental, or if the minibus had been the bomber's target.

The blast - which killed the bomber and wounded five passengers - occurred as the bus was several hundred meters (yards) from a police station in the Kazbek district. The minibus had been traveling from Khasavurt to Dylym, the spokesman said

Dagestan, a southern region near the Caucasus Mountains, is plagued by violence connected with criminal activities and with insurgent activity that has spread from neighboring Chechnya.