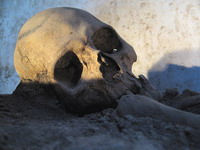 Workers rebuilding a 19th century Moscow house earlier this month discovered the remains of an estimated 34 people. At the time, the chief Moscow police spokesman said the remains appeared to date back to the 1930s and that some had been shot in the head.

Historians also said the remains most likely were victims of Stalin's political terror.

But a government investigator, Sergei Buluchevsky, said preliminary forensic findings indicated the remains were at least a century old and that there were no signs of violent death, the ITAR-Tass news agency reported.

Experts "probably will be unable to determine the cause of death," ITAR-Tass quoted Buluchevsky as saying.

He said more precise estimates of the timing of their deaths could come next month.

In the 1930s, the Soviet Union experienced a wave of political killings and purges of the government and Communist Party orchestrated by Stalin's secret police. The killings reached their apex in 1937 during what came to be known as the Great Terror.

An estimated 1.7 million people were arrested in 1937-38 by security services alone, and at least 818,000 of them were shot, according to Arseny Roginsky, a Moscow historian and rights activist who is an expert on the crimes of the Stalin era.

The find came amid increasing concerns among Russian liberals and rights activists that the government of President Vladimir Putin, a longtime KGB officer, is recasting Stalin's legacy and playing down the state-sponsored brutality of the Soviet era to justify its own increasingly tight control.