Putin: Russian military to be modernized 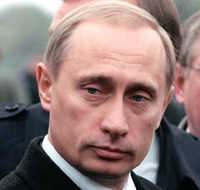 Putin: Russian military to be modernized

Russia will take care of its retired and acting officers and complete its rearmament program fot the military, Putin promised Thursday.

In a theatrical twist to a three-hour, live call-in show, Russian television first showed the test launch of an intercontinental ballistic missile that had taken place earlier in the day and then fielded questions from officers of the Strategic Missiles Forces in Plesetsk, the northern cosmodrome where the missile had been launched.

Putin said that Russia would pay "significant" attention to the so-called "nuclear trio" - intercontinental ballistic missiles, nuclear submarines and strategic bombers. "Our plans are not simply considerable, but huge. At the same time they are absolutely realistic," Putin said. "I have no doubts that we will accomplish them."

He said Russia would continue modernizing its strategic and conventional forces and attempt to achieve a rearmament of the country's armed forces by 2015. Plans also include the creation of a fifth-generation attack fighter by 2012-15 and phasing in Iskander-M missile systems.

"Our armed forces will be compact and very efficient, and they will guarantee this country's security for years to come," he said.

Earlier Thursday Russia launched a Topol RS-12M from Plesetsk. The missile hit its intended target on Kamchatka near the Pacific Ocean, the Strategic Missile Forces said in a statement.

On Thursday, Russia and India signed an agreement for the joint development of parts for the fifth-generation fighter jet, which will combine advances in maneuverability, radar and stealth technology.