Putin confirms to step down 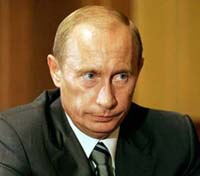 Putin confirms to step down

President Vladimir Putin confirmed on Thursday that he would give up presidency next year, but he didn’t concretize what role he would have.

With just two months remaining before crucial parliamentary elections - and five before presidential elections - speculation has mounted about Putin's plans once his second, consecutive term ends in March.

Putin, who is widely popular in Russia, has said he would not stay on as president, despite a chorus of calls from lawmakers and others. Last month, however, he indicated he would consider becoming prime minister.

"In 2008, in the Kremlin there will be a different person," Putin said, during his annual nationally televised question-and-answer session.

He also said he expected no radical policy changes from his successor, saying the next president should "keep the stabile course of our nation and continuity in realizing the plans that have been devised in recent years."