Answering people's questions during today's televised address, Vladimir Putin stated that the US-led campaign in Iraq had become a campaign against the people of Iraq. 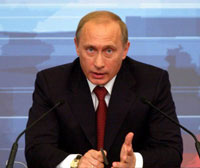 Thursday's session - Putin's sixth such event since taking office in 2000 - is being held as questions mount about his plans after his second presidential term ends early next year.

The event, usually lasting several hours, is broadcast on Russia's major TV channels and radio stations, and consists of people from around the vast country asking the president selected questions, mainly on bread-and-butter issues.

A man from the city of Novosibirsk, Siberia, asked Putin about comments he said were made some years ago by former U.S. Secretary of State Madeleine Albright, who suggested that Siberia had too many natural resources to belong to one country.

"I know that some politicians play with such ideas in their heads. This, in my view, is such political erotica that might satisfy a person but hardly leads to a positive result," he said.

"The best example of that are the events in Iraq - a small country that can hardly defend itself and which possesses huge oil reserves. And we see what's going on there. They've learned to shoot there, but they are not managing to bring order.

"One can wipe off a political map some tyrannical regime .... but it's absolutely pointless to fight with a people," he said. "Russia, thank God, isn't Iraq. It has enough strength and power to defend itself and its interests, both on its territory and in other parts of the world."

Putin opened the session by reeling off a string of statistics showing the improvement of Russia's economy in the seven years he has been in office. Much of the economic growth has been due to high world oil prices.

Putin also said the country's birth rate was the highest it has been in 16 years and the death rate the lowest since 1999.

A sampling of questions listed on a Web site set up by the broadcasters ranged from concerns about salaries for public sector workers to the 2014 Winter Olympics in Sochi to environmental worries.

Putin, who is widely popular among Russians for the stability and relative prosperity during his regime, has sought to use phone-ins along with tightly choreographed, lavish television coverage to project the image of a leader responding directly to voters' concerns.

Last year, Putin answered more than 50 questions in a three-hour session. Correspondents from the state-run networks chose questioners from among small crowds in towns and cities across Russia; it was impossible to tell whether questions were arranged in advance or if questioners were coached.

Others phoned in, submitted questions by e-mail or sent text messages.