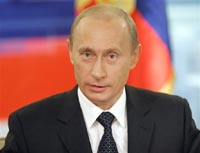 The session was the sixth such event that Putin has participated in since coming to office in 2000 and was being closely watched for clues to his plans after his second presidential term ends next year.

Putin opened the session - broadcast on all state-run TV channels - by reeling off a string of statistics showing the improvement of Russia's economy in the seven years he has been in office. Much of the economic growth has been due to high world oil prices.

"It's unlikely that we will succeed in keeping inflation in the planned framework," Putin said. "It's planned that it will be around 8 percent."

Putin also said the country's birth rate was the highest it has been in 16 years and the death rate the lowest since 1999.

The event in past years has lasted several hours and consisted of people from around the vast country asking the president selected questions mainly on bread-and-butter issues.

A sampling of questions listed on a Web site set up by the broadcasters ranged from concerns about salaries for public sector workers to the 2014 Winter Olympics in Sochi and environmental worries.

Putin, who is widely popular among Russians for the stability and relative prosperity he has brought to the country, has sought to use phone-ins along with tightly choreographed, lavish television coverage to project the image of a leader responding directly to voters' concerns.