Lenin's fate should be put to referendum 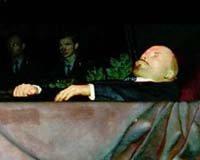 Lenin's fate should be put to referendum

A top Kremlin official said that the fate of Lenin’s mausoleum should be put to Russia voters in a referendum.

The comments by Vladimir Kozhin, who heads of the Kremlin's property department, reflect the on-again, off-again debate among officials in President Vladimir Putin's government about what to do with the Red Square mausoleum. The statement appears to show the Kremlin's reluctance to take up the sensitive issue before December's parliamentary elections and a presidential vote next March.

"Of course, a necropolis in the center of the capital is nonsense. But whether it should be there or not, let other decide," Kozhin was quoted as telling the government-daily Rossiskaya Gazeta.

"We have only just moved away from revolution, from endless political battles, the country has become normal to live in, to work to get rich. But just touch a painful subject and war will come to the entire country, rousing our parents, grandmothers, grandfathers....," he told the newspaper.

Kozhin also said the upkeep of the tomb, as well as regular treatments for the wax-like body inside, costs the government "several tens of millions of rubles (hundreds of thousands of dollars) a year - this isn't much at all."

Putin's anti-Communist predecessor, Boris Yeltsin, repeatedly tried to get the hulking, red granite structure that was center stage for Communist leaders moved from the shadow of the Kremlin walls and bury Lenin - perhaps according to his wish to buried next to his mother in St. Petersburg.

But Communists, for whom the mausoleum is nearly a holy shrine, vowed to galvanize protests.

Putin, for his part, said in 2001 that he opposed the removal of Lenin's body because it might disturb civil peace. Meanwhile, he has resurrected several other Soviet symbols - including the Red Star for the military and the Soviet national anthem - albeit with different words.

Underscoring the Putin government's ambivalence about the mausoleum was the decision to cover it in staging and bunting during ceremonies marking the 60th anniversary of the end of World War II in 2005 so as not to embarrass Western leaders.

Lenin's body has been on display in the mausoleum since 1924.