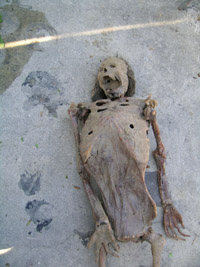 Remains of at least three dozen people apparently dating back to the era of Josef Stalin's political purges were found during the reconstruction of the 19th century building in Moscow.

Police also found a rusted pistol on the estate where the remains of an estimated 34 people were found, some with gunshots to the head, Moscow city police spokesman Yevgeny Gildeyev said.

The remains, which were found Wednesday under a basement of one of the estate's buildings, appeared to date to the 1930s, he said, and more could be found. Investigators from the prosecutor's office were trying to determine their identities.

The property was owned by a well-known czarist-era noble family, the Sheremyetevs.

The buildings are located in downtown Moscow, about midway between Red Square and Lubyanka, the headquarters of the KGB, where political prisoners were interrogated and executions carried out.

The Soviet Union in the 1930s experienced a wave of politically motivated killings and purges of the government and Communist Party orchestrated by Josef Stalin's secret police. The killings reached their apex in 1937 during what came to be known as the Great Terror.

An estimated 1.7 million people were arrested in 1937-38 by the security services alone, and at least 818,000 of them were shot, historians estimate.

Tamara Chakravadze, an elderly Moscow resident, said she went to the site on hearing news reports of the discovery since her own relatives were victims of Stalin's purges.

She said her father told her that the estate used to be the site of a prison where people were held before being sent to labor and mining camps as far away, for example, as Kolyma, the Arctic region thousands of miles (kilometers) east of Moscow that was home to a huge network of Gulag camps.

"My grandfather was killed and my father served an 8-year prison term in Kolyma when I was just a baby," she told AP Television News. "That is why for me these bones are sacred, and there is no forgiveness for those who have not repented even today."