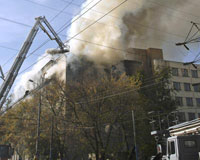 At least four people were killed and more than two dozens injured by the fire which broke out at an institute in Moscow on Tuesday, a Russian emergency official said.

The blaze erupted around 1 p.m. (0900 GMT) at the Moscow State Institute of State and Corporate Management, said Viktor Beltsov, spokesman for the Emergency Situations Ministry.

He said at least four people were killed and 29 were treated for smoke inhalation, burns and other injuries.

Russia records nearly 18,000 fire deaths a year - several times the per capita rate of the United States and other Western countries.

Deadly blazes at schools, hospitals and other state-run facilities in recent years have revealed official negligence and rampant violations of fire safety rules.