Russia to retaliate if other nations deploy weapons in space

Russia's Space forces chief said Thursday that the nation would have to retaliate if others deploy weapons in space - a stern warning to the United States. 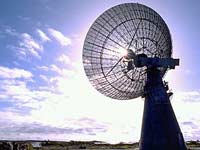 Russia to retaliate if other nations deploy weapons in space

While Col.-Gen. Vladimir Popovkin did not name any specific country, he was clearly referring to U.S. plans for space-based weapons, which the Kremlin had vociferously opposed.

"We don't want to wage a war in space, we don't want to gain dominance in space, but we won't allow any other nation nation to dominate space," Popovkin said, according to Russian news agencies. "If any country deploys weapons in space, then the laws of warfare are such that retaliatory weapons are certain to appear."

U.S. President George W. Bush signed an order last year tacitly asserting the U.S. right to space weapons and opposing the development of treaties or other measures restricting them.

Bush also had pushed an ambitious program for space-based missile defense, and the Pentagon is working on missiles, ground lasers and other technology to shoot down satellites.