Viktor Zubkov, Putin's nominee for the new head of the Russian government, conducted talks with lawmakers Thursday before a parliamentary vote on his confirmation. 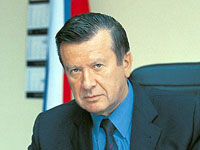 Putin unexpectedly nominated Viktor Zubkov on Wednesday after dismissing Mikhail Fradkov, who had chaired the Cabinet of Ministers since 2004. The State Duma, the loyal lower parliament house is expected to approve the choice Friday.

Zubkov, a member of Putin's inner circle who has spent the last six years overseeing investigations into suspicious financial transactions as the head of the agency charged with fighting money-laundering, was widely praised by members of the dominant pro-Kremlin party United Russia after his nomination was announced.

But while his confirmation is a foregone conclusion, Putin's nomination of a virtual unknown ahead of crucial elections muddied Russia's political waters, amplifying questions about the popular leader's plan for his country and himself.

Putin said Wednesday that he needed to appoint a government better suited to the campaigns for December Duma elections and the March presidential vote, in which he is constitutionally barred from seeking a third straight term, and to "prepare the country" for life after the elections.

Just how, though, he left unclear - likely deliberately, to demonstrate that he is in control and to leave him room for maneuver as he prepares to step down.

The nomination ignited speculation over Zubkov's role: whether he is Putin's favored successor or a caretaker prime minister, perhaps to be replaced closer to the presidential vote. Some saw his appointment as signaling Putin's intention to retain control over the country even after he steps down, and others speculated that his caretaker role could extend into the presidency, allowing Putin to return in 2012 or sooner.

Putin has strongly suggested that he plans to retain some measure of influence after he leaves office, and has not ruled out a presidential bid in 2012.