Russian rocket carrying a Japanese communications satellite malfunctioned after liftoff and crashed in Kazakhstan on Thursday, officials said. Nobody was hurt. 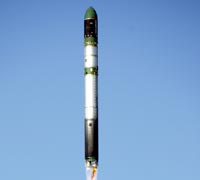 The Proton-M rocket failed to put the JCSAT-11 satellite into orbit because of a problem during operation of the second stage, the U.S.-based American-Russian joint venture International Launch Services said.

The rocket failed 139 seconds after its launch from the Russian-rented Baikonur facility in Kazakhstan, and its second and third stages veered from the planned trajectory at an altitude of 74 kilometers (46 miles), said Alexander Vorobyov, a spokesman for the Russian space agency Roskosmos.

Parts of the rocket fell to the ground in an uninhabited area about 50 kilometers (30 miles) southwest of the central Kazakh town of Zhezkazgan, Vorobyov said.

Under an agreement with Kazakhstan, launches of Proton rockets from Baikonur were suspended until the cause of the crash is determined, Vorobyov said.

He said that was unlikely to affect future launches, but an official at state-controlled Khrunichev State Research and Production Center, which makes Proton rockets, said that would depend on when an official investigative commission delivers its report.

Following an accident involving a different kind of rocket launched from Baikonor last year, the report came in about six weeks, and Proton launches are scheduled for November and December, Khrunichev spokesman Alexander Bobrenyov said.

In July 2006, a Dnepr rocket carrying 18 satellites for various clients crashed shortly after takeoff from the Baikonur, spreading highly toxic fuel over a wide swath of uninhabited territory in Kazakhstan.