Russia's President Putin always makes front pages of almost all newspapers in the world when he releases sharp statements about Russia's growing power in international politics. However, Putin created a different kind of controversy when he removed his shirt for cameras while vacationing with  Prince Albert II of Monaco in the Siberian mountains last week. 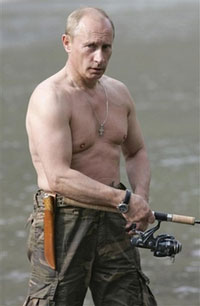 The mass market tabloid Komsomolskaya Pravda on Wednesday published a huge color photo of the barechested president, under the headline: "Be Like Putin." It's excuse? A guide showing exactly what exercises were required to build up a torso like that of the Russian leader.

Meanwhile, Kremlin watchers have been busy trying to guess what kind of political message the pictures might send, given that Putin has insisted he plans to step down at the end of his second presidential term next year, as required by the constitution.

One radio talk show host speculated that the pictures were meant to enhance Putin's personal appeal to voters - a strong signal that he doesn't plan to relinquish power. When the commentator, Yevgeniya Albats, went on to suggest that his half-naked photo shoot was unbecoming a Russian leader, female listeners peppered her with emails expressing admiration for Putin's physique.

Komsomolskaya Pravda reported that women who visited its Web site posted comments on Putin's "vigorous torso" and said they "were screaming with delight and showering (him) with compliments."

Russian gay chat rooms and blogs were particularly intrigued by the photos: Some claimed that Putin, by stripping to his waist, was somehow pleading for more tolerance of homosexuality in Russia - where gays and lesbians are for the most part forced to remain closeted.

One satirical photo circulating on the Internet jokingly compared Putin's mountain adventure with Prince Albert to the movie Brokeback Mountain, a love story about gay cowboys.

The 54-year-old Russian leader, who is married with two daughters, has long cultivated an image of machismo and manliness. Well-known as a downhill skier and black belt in judo, Putin has appeared on national television driving a truck, operating a train, sailing on a submarine and copiloting a fighter jet.

All these exploits have been widely publicized, thanks to the Kremlin's control of major media.

In contrast to his predecessor Boris Yeltsin, notorious for drunken antics, Putin has established an image as serious, energetic, sober and sharp-witted. In a country that worships its Olympic and other world-class athletes, he has also taken care to stay physically fit.

In interviews, he speaks avidly about judo and athletics.

"Sport has helped me form my own personal point of view on the world, on people and my approach to them," he said in an interview posted on the Kremlin Web site.

Some say it's all part of the Putin mystique.

"He's cool. That's been the image throughout the presidency, cool," said Sergei Markov, Kremlin-connected head of the Moscow-based Institute for Political Research.

The prince and the president spent several days on vacation in the mountainous southern Siberian region of Tuva. Dressed in fatigues, fingerless gloves, a bush hat and chic sunglasses, television networks broadcast scenic footage of Russia's most powerful man riding horses, rafting down a river, fishing for grayling and off-roading in a sport utility vehicle.

Amid all the outdoor posturing last week, the image-handlers were careful to make sure Putin was shown staying on top of major events - a lesson he learned after he was criticized for failing to immediately interrupt his vacation after the Kursk submarine sank in August 2000.

Putin's Siberian holiday coincided with the bombing of a passenger train near St. Petersburg earlier this month. This time, the TV networks showed him reportedly issuing orders to top ministers by cell phone from his vacation retreat.

Stanislav Belkovsky, head of the National Strategy Institute think tank, said the pictures from Tuva were nothing more than an effort to reassure Russians that Putin knows how to relax - and was preparing for retirement.

Yevgeny Volk, who heads the Heritage Foundation's Moscow office, said the political elite increasingly views Putin as a lame duck leader and that half-naked photos only strengthen the impression that he should no longer be taken seriously.