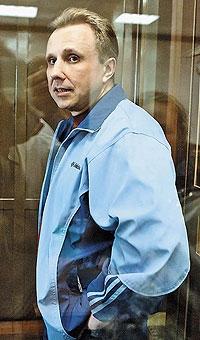 Pichugin had been sentenced last year to 24 years in prison on the same charges, but prosecutors had appealed for a life sentence and Russia's highest court had ordered a retrial.

Pichugin, the former head of Yukos security service, has insisted he is innocent.

"The sentence is not just. All the evidence has been turned on its head," defense lawyer Georgy Kaganer said in televised comments.

Pichugin's arrest in 2003 had marked the launch of the government's politically charged campaign against Yukos and Khodorkovsky - once Russia's richest man.

The crackdown on Yukos that led to its partial renationalization and an eight-year prison sentence for Khodorkovsky was widely seen as a Kremlin drive to silence an opponent and strengthen control of the crucial oil sector.

During two previous trials, Pichugin was found guilty of organizing the killing in 2002 of a businessman from the southern city of Tambov and his wife, as well the 1998 killings of a businesswoman and the mayor of the oil-town of Nefteyugansk. He was also convicted of organizing attacks another businessman and plotting to kill a former Yukos employee.

"I think that this sentence will be the first step in the process of trying Nevzlin in absentia. The court established (Nevzlin's) participation in all instances connected with the murders and the murder-kidnappings organized by the convicted Pichugin," Kashaev was quoted as saying by ITAR-Tass.