Russian unmanned cargo spaceship with over 2.5 tons of supplies, equipment and gifts was launched on Thursday. 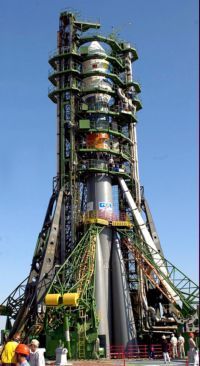 The Progress M-61, mounted atop a Soyuz-U booster rocket, lifted off as scheduled at 9:34 p.m. (1734GMT) from the Baikonur cosmodrome in Kazakhstan, said Russia's Mission Control spokesman Valery Lyndin.

"The launch went on without a hitch, and nine minutes later the ship entered the designated preliminary orbit," Lyndin told The Associated Press.

After a series of maneuvers to adjust its orbit to that of the station, the ship is scheduled to moor at the orbiting outpost Sunday, Lyndin said.

The cargo ship is also carrying two spare computers to back up those which failed in June, briefly disabling orientation and oxygen production on the Russian side of the space station. The breakdown was quickly fixed, and the computers have since been working normally.

"The crew isn't going to replace the station's computers, which are functioning normally; those delivered by Progress will serve as a back up," Lyndin said.

The breakdown in June was apparently caused by a spike in static electricity while power cables were being hooked up to the station's new solar panels. The crew unplugged and then reconnected the power feed between the U.S. and Russian sections and rebooted the computers, fixing the problem. Engineers also changed the software to make sure the problem was fixed, Lyndin said.

Along with other cargo, the spaceship is also carrying books, movies, gifts and other personal items for the crew.