Russia on Saturday suspended its participation in a key European arms control treaty that governs deployment of troops on the continent, the Kremlin said. 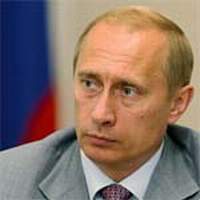 President Vladimir Putin signed a decree suspending Russia's participation in the Conventional Forces in Europe Treaty due to "extraordinary circumstances ... which affect the security of the Russian Federation and require immediate measures," the Kremlin said in a statement.

Putin has in the past threatened to freeze his country's compliance with the treaty, accusing the United States and its NATO partners of undermining regional stability with U.S. plans for a missile defense system in former Soviet bloc countries in Eastern Europe.

The treaty, between Russian and NATO members, was signed in 1990 and amended in 1999 to reflect changes since the breakup of the Soviet Union, adding the requirement that Moscow withdraw troops from the former Soviet republics of Moldova and Georgia.

Russia has ratified the amended version, but the United States and other NATO members have refused to do so until Russia completely withdraws.

Kremlin spokesman Dmitry Peskov said Russia could no longer tolerate a situation where it was complying with the treaty but its partners were not, and he expressed hope Russia's move would induce Western nations to commit to the updated treaty.

"Such a situation contradicts Russia's interests," Peskov Told the Associated Press. "Russia continues to expect that other nations that have signed the CFE will fulfill their obligations."

The treaty is seen as a key element in maintaining stability in Europe. It establishes limitations on countries' deployment of tanks, armored combat vehicles, artillery, attack helicopters and combat aircraft.

Withdrawal from the Conventional Forces in Europe Treaty would allow Moscow to build up forces near its borders.

But Russian military analysts have said the possibility of suspending participation in the treaty was a symbolic raising of the ante in the missile shield showdown more than a sign of impending military escalation.

Pavel Felgenhauer, a Moscow-based defense analyst, said the moratorium probably won't result in any major buildup of heavy weaponry in European Russia. Russia has no actual interest in the highly costly buildup of forces because it faces no real military threat and has no plans to launch an attack of its won, he said.

But, he said, it could mean an end to on-site inspections and verifications by NATO countries, which many European nations rely on to keep track of Russian deployments.

For the United States, the moratorium will mostly be a symbolic gesture, he said, since the U.S. has an extensive intelligence network that keeps close track of Russian forces.

But it will still be seen as another unfriendly move in Washington, Felgenhauer predicted.

"This will be a major irritant," he said. "It will seriously spoil relations. The kind of soothing effect from the last summit with Putin and Bush will evaporate swiftly," he said referring to a summit between Putin and U.S. President George W. Bush earlier this month at the Bush family home in Kennebunkport, Maine.

Felgenhauer also said that there is no provision under the treaty for a moratorium, suggesting Russia was acting illegally. "This is basically non-compliance, and this is an illegal move."