Russia to give visas to Georgian applicants

Russia will start giving entry visas to some Georgian applicants, easing a suspension imposed last year to punish the ex-Soviet republic during a dispute between the two nations. 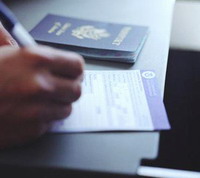 Russia to give visas to Georgian applicants

Starting Tuesday, the Russian Embassy in Georgia will issue visas to applicants with personal invitations and approval for temporary residence in Russia and those with close relatives who are Russian citizens, embassy official Ivan Volynkin said.

The ambassador returned in January, but air travel has not been restored despite talks on the issue.

"We have taken into account the appeals of Georgian citizens and the Georgian church," Vasilyev said.

Relations have been strained over Georgian President Mikhail Saakashvili's efforts to decrease Russian influence and forge close ties with the West. Russia's links with two separatist regions in Georgia have also been an issue of concern in Georgia.